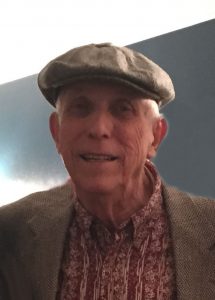 NOTE:  Kenneth Barker has been a columnist in The Record for nearly five years.  His column, “Rounding the Jog,” first appeared in The Record on June 5, 2014.

Ken’s service will take place in June.  Memorial service will be 2:00 PM on Friday, June 14, 2019 at the United Methodist Church in Rock Rapids, IA, with Rev. Kathy Sides officiating.

A time of visitation and refreshments will follow the service in the church basement.

In lieu of flowers the family would prefer memorials, which will be designated to Rock Rapids community projects and charities.

For a complete obituary and online registry, please visit www.jurrensfuneralhome.com

Kenneth Lee Barker was born March 22, 1935 at the Methodist Hospital in Sioux City, Iowa to Herbert and Lucile (Shipman) Barker.  He graduated from Correctionville, Iowa High School in 1953.

Ken continued his education, graduating from Wayne State Teacher’s College in Wayne, Nebraska in 1959.  He taught high school speech at Central Lyon from 1959 until his retirement in 1994.

Shortly after starting at Central Lyon, he met his future wife, Jane Crane Turner.  They were united in marriage at her parents’ home in Carroll, Iowa on June 16, 1962.

In retirement, Ken worked various jobs including delivering medication for Lewis Drug, writing articles for several local newspapers (typically under the pseudonym of Kaleb), and being a member of the Sunshine Boys.  Ken enjoyed writing and other community pursuits.

He also tried to serve God and attempted, with the Almighty’s guidance, to leave the woodpile a tad higher than he found it.  Ken’s wish for the future was that Christ return and clean up the mess we have made of the kingdom His Father created.

His epitaph is that Ken found “The Way” when he was waxing old.  He found Him in the Scriptures, which became the greatest blessing he ever received.

When He walks with you, talks with you and tells you that you are His own, life takes on a new meaning.  Find Him early.  Make Him your mentor and best friend.  You will never regret it.  I kid you not.

A lifelong teacher, Ken told anyone and everyone he met his two principles he wanted people to live by: PMA (Positive Mental Attitude) and WYBYCDSONYAR (Whether You Believe You Can Do Something Or Not, You Are Right).

After his passing, he had one last prospect — that his body be donated to Mayo Clinic in Rochester, Minnesota for the purpose of medical education, research and surgical training, and the development and testing of new surgical devices and techniques.