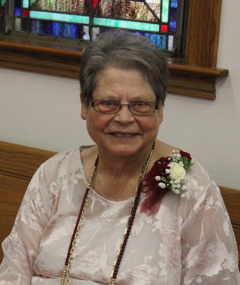 Vickie Lynn Knaack was born May 13, 1952 to Eldon “Huck” and Lola (Lewis) Arnold.  Vickie graduated from Westwood High School, and then she earned a teaching degree in Math and Earth Science from the University of Northern Iowa.

She was united in marriage to Dale Knaack on August 31, 1974 in Rock Branch, Iowa.  They raised their three children on the family farm outside of Correctionville.

Vickie enjoyed being a homemaker for her family.

She loved watching her children, and later her grandchildren, participate in school events and sporting events.

She was preceded in death by her parents, Lola and Eldon Arnold.