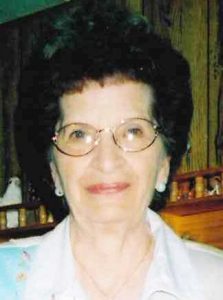 Deloris A. (Morgan) Holtgrewe, 84, of Sioux City, formerly of Remsen, entered her new life on January 14, 2019 after a battle with dementia.

Per her wishes, cremation rites have been accorded. A celebration of life gathering will be held from 2-4 p.m. on Saturday, May 11, at the Moville Fire Station (24 Main Street in Moville, Iowa).

Private family burial will be in Arlington Township Cemetery. Condolences for the family may be sent to Pamela Montagne at 3038 Melrose Ave., Sioux City, IA 51105.

Deloris started her family after marrying Ben Holtgrewe on May 29, 1952, in Remsen. They brought three sons and a daughter into this world. While in Remsen,

Deloris was often referred to as “Mom” by several younger kids. That title carried over to the adults.

After moving to Colorado, Deloris started her career at Wendy’s, working there for several years. Relocating to Sioux City, she continued working at Wendy’s.

Deloris retired after the passing of her husband, Ben, on January 30, 2007.

She enjoyed camping, fishing, cooking, and spending time with the grandkids.

After breaking her hip in January 2017, Deloris moved in with her daughter and son-in-law in Sioux City, where she was taken care of for almost three years.

She spent the last 28 days in a care facility, where she prepared for her new life.