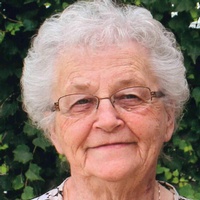 Visitation service was held at 11:00 a.m. Wednesday, April 24, 2019 at Waterbury Funeral Service of Sergeant Bluff. Burial will be in Memorial Park Cemetery.

In 1952 she graduated from Pierson High School, where she played varsity basketball and was the captain of her team.  During her senior year, the basketball team went to the state tournament.

She graduated from the National Business Training School in Sioux City in 1953.

Margaret married Cletus Stinton July 1, 1955 in Correctionville, Iowa. During their marriage, they lived in Denver, Colorado, Le Mars, and Sioux City before finally settling in Sergeant Bluff in 2004.

In her last years, she resided at Floyd Place in Sergeant Bluff.

During her career, she worked for Bellas Hess Shopping Center, the Woodbury County Sheriff’s Department, and Sears.

Margaret was a member of St. Mark Lutheran Church since 2001. Margaret and Cletus enjoyed boating, camping, and golfing.  In 1980 they, along with Margaret’s mother Katie, went to Germany to visit family.

She was an avid quilter, sharing her quilts with family members, friends and her church.

She was preceded in death by her husband and her parents.

Memorials can be sent to Hospice of Siouxland.