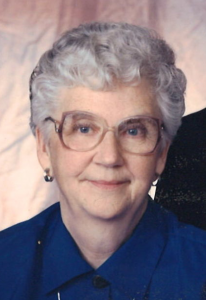 Joyce C. Wurscher, age 95, of Moville, passed away on Thursday, May 9, 2019 at Lawton Senior Living of Lawton.

A funeral Mass was held on Tuesday, May 14, 2019 at 10:30 a.m. at the Immaculate Conception Church of Moville with Msgr. R. Mark Duchaine officiating.  Burial was at the Arlington Cemetery of Moville.

Joyce Cathrina Wurscher was born June 25, 1923 in Sioux City, Iowa to John and Elfrieda (Hansen) Bush.  She was a graduate of Lawton High School.

Joyce was united in marriage to Doug Wurscher on April 27, 1943 in Walnut Grove, Minnesota.  To this union, three children were born.

Joyce and Doug made their home in the Lucan and Walnut Grove, Minnesota area.  In October 1954 they moved to the Lawton and Moville area, where they farmed until they retired from farming in 1982.

They moved into Moville in 2002 and she lived there until moving into Lawton Assisted Living in July 2018.

She worked in the Woodbury Central school lunch program and at the lunch wagon at area auctions in addition to being a homemaker.   She was a member of Immaculate Conception Church in Moville, where she was an organist for 50 years and was also a member of the choir.

Joyce was also active in the Immaculate Conception Guild and Catholic Daughters of America.  She was a regular volunteer at the church and at the church food stand at the Woodbury County Fair.

Joyce was preceded in death by her parents; her husband Doug in 2006; a granddaughter, Becki Wurscher; two sisters and one brother.