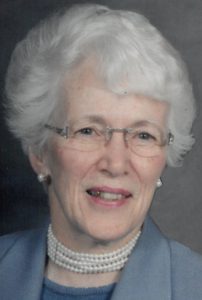 Mary Margaret Sudbeck, 89, of Sioux City, Iowa, passed peacefully in her sleep on the morning of May 9, 2019, at Holy Spirit Retirement Home.

A service for Mary Margaret will be held at 10:30 a.m. on Thursday, May 16 at St. Michael’s Catholic Church in Sioux City. Rev. David Alan Hemann will officiate.

Mary Margaret will be buried at Calvary Cemetery in Sioux City, Iowa.

Mary Margaret came into this world on May 21, 1929 in Laurel, Nebraska, the daughter of James and Rose McGowen. She graduated from Cedar Catholic High School in 1947 and taught at the Tip Top Country School from 1947–1948.

Before meeting her spouse, she worked as a bookkeeper for her uncle, Benny McGuirk.

Mary Margaret married Duane Sudbeck on August 21, 1950, and the two remained united in marriage until Duane’s death in 2012.

In 2000, they celebrated their 50th wedding anniversary with friends and family.

Mary Margaret was a longtime member of the Cathedral of the Epiphany Catholic Church, where she served on many committees and sang in the choir. Upon her death, she belonged to St. Michael’s Catholic Church.

Throughout her life, she was a voracious volunteer, serving on the Board of Directors for the Birthright of Siouxland, the Blue Army, the Catholic Daughters of America, and the Carmel Board for the Carmelite Monastery.

For many years, she helped her husband care for the grounds of Trinity Heights.

Mary Margaret was a loving wife, mother, grandmother, great-grandmother, sister, and aunt. Her strength and faith will be forever missed.

She will be remembered for her smile; her infamous hugs; her unwavering generosity; her love of the Rosary; and her homemade bread, cinnamon rolls, and hot-and-cold chocolate cake.  Her passionate cheerleading at sports games and motherly tending to her grandkids — bathing them, singing to them in her creaky wooden rocking chair — will always be special memories for her loved ones.

She was preceded in death by her parents, James and Rose McGowen; her husband, Duane; two of her sons, Daniel and John; and her siblings, Catherine (Kitty Ann) Uhrich, Helen Sudbeck, and Sister Jane McGowen.

Arrangements are under the direction of Meyer Brothers Colonial Chapel. Condolences may be sent to www.meyerbroschapels.com.

In lieu of flowers, memorials may be made in Mary Margaret’s name to St. Michael’s Catholic Church, to Trinity Heights Queen of Peace, or to Bishop Heelan Catholic Schools.