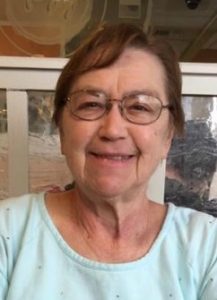 Patricia was born February 20, 1944 in Sioux City, Iowa, the daughter of Russell and Marjorie (Westergaard) McLarty. She graduated from Kingsley-Pierson High School in 1962, and also from Nettleton Business College in Sioux City, Iowa.

Patricia worked as a bookkeeper at Cloverleaf Cold Storage for over 40 years.

She was a member of the D.C. Boat Bunch. She loved her grandchildren and attended their many activities.

She enjoyed boating, fishing, going to their cabins, and having coffee at the old Carousel and Park Plaza with her many friends.

She was also an avid reader.  She enjoyed playing Solitaire, crocheting, and doing cross stitch.

She was preceded by her husband, Thomas Saltzman, Sr.; a son, Timmy Saltzman; and her parents, Russell and Marjorie McLarty.