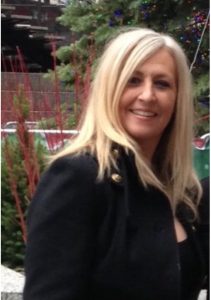 Linda was born December 26, 1962 in Sioux City, Iowa to John and Gayla Wilson of Anthon. She attended school at Anthon-Oto and graduated in 1981.

Following high school, she attended Morningside College before moving to Arizona where she attended Plaza Three Academy. It was in Arizona that she met her husband Clint.

The couple lived in Arizona for several years where they had two children, Clint Jr. and Steffani. The family then moved back to Sergeant Bluff where the children attended Heelan School.

Linda was a stay at home mother who dedicated her life to her children. She loved her children, family, friends and music.

She is survived by her husband, Clint Jiroux of Sgt. Bluff; two children, Clint Jr. of Phoenix, AZ and Steffani of Washington, D.C.; her parents John and Gayla Wilson of Anthon; her mother-in-law, Rose Jiroux of Phoenix; a sister, Kimberly Wilson of California; two brothers, Greg Wilson of Sioux Falls, and Gary and his wife Leanne of Snohomish, WA; and nieces, nephews and cousins.

She was loved by all and will be truly missed.