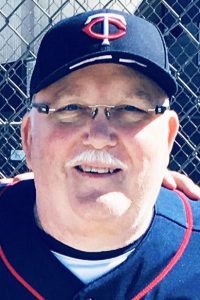 Services were held at 11 a.m. Monday, May 30 at All Saints Catholic Parish-St. Joseph Church in Le Mars. The Rev. Bruce Lawler celebrated Mass. Burial will be in Calvary Cemetery, Le Mars.

Arrangements are under the direction of Rexwinkel Funeral Home in Le Mars. Expressions of sympathy can be extended to the family through www.rexwinkelfh.com.

Roger was born on March 4, 1955, in Le Mars, to Carl and Audrey (Dawson) Pitts. Roger spent his childhood growing up in the Le Mars area and from a young age developed an immediate love for baseball and classic cars.

Roger graduated from Le Mars Community High School in 1973, where he excelled on the Le Mars Bulldog baseball team.

After graduation, Roger began working at their family owned business, Carl’s Welding Shop. Carl passed away suddenly on Jan. 22, 1976 and at the young age of 20, Roger took over his family’s business and ran it successfully with his mother, Audrey, for 40 more years until his retirement in 2016.

In Le Mars, he met the love of his life and best friend, Karen Hodgson, and on Jan. 15, 1977 they were united in marriage at St. Joseph Catholic Church in Le Mars. To this union came his greatest pride, his three children, Emily, Joe and Jon.

Roger loved his family more than anything, and especially enjoyed coaching and watching his children’s sports teams in softball, baseball and basketball. He created a special bond with all the kids he coached, always sure to weave in a life lesson while teaching the proper follow through on the mound. Roger believed in volunteering and giving back to your community and working with Le Mars’ youth was just one of the many ways he gave back.

Roger took great pride in his business and it was his top priority that he and his employees provided good products and quality service to their customers. His skill set as a welder and metal fabricator was unique, talents he learned at a young age from his father, Carl. He valued a solid day’s work and the satisfaction that followed.

During Roger’s younger years, he enjoyed playing town team baseball (Le Mars Cubs and Orioles), slow-pitch softball, rec-league basketball, and a Monday night bowling league. He was also a member of the Knights of Columbus and the Fraternal Order of Eagles.

Roger loved the time spent with his cousins and always welcomed his nieces and nephews into his home, and often the night ended with a showing of his favorite movie “Uncle Buck.”

He and his family made multiple trips to spring training in Arizona and to the College World Series in Omaha. Along with other friends he helped build Gehlen Catholic’s first baseball field in the early 1990s.

Roger valued his Catholic faith and this helped him persevere through his battle with cancer following his initial diagnosis in 1998. In close collaboration with his many caregivers and doctors, he cherished the second chance on life and with a positive attitude he maximized every day he lived.

He was preceded in death by his parents, Audrey and Carl; parents-in-law, John and Patricia Hodgson; sister-in-law, Shaune Hodgson; and many aunts, uncles and cousins.

In lieu of flowers, memorials are preferred and will be directed to The Mayo Clinic, The Multiple Myeloma Research Foundation and a college scholarship fund for local high school athletes.