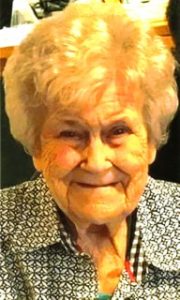 A funeral service was held on Friday, May 24, 2019 at 10:30 AM at the Nicklas D. Jensen Funeral Home of Moville with Rev. Don Pobanz officiating.

Burial was at the Saint Clair Cemetery of Ute.

She was united in marriage to Lionel “Fred” Ehlers on September 22, 1946 at Zion Lutheran Church in Denison, Iowa.  To this union, three sons were born.

They made their home on a farm near Bronson, Iowa, where Christine enjoyed her job as a farm wife.  Lionel passed away July 25, 1990.

She is survived by her sons, Lonnie (Shirley) Ehlers of Moville, IA and Larry (Carla) Ehlers of Lawton, IA; her daughter-in-law, Nancy Ehlers of Sioux City, IA; eight grandchildren and seventeen great-grandchildren.

Christine was preceded in death by her parents; her husband, Lionel “Fred” Ehlers; her son, LaVern Ehlers; and her brother, Paul Pobanz.