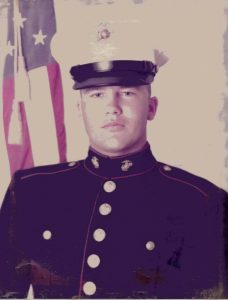 Funeral services will be at 10:30 a.m. on Friday, May 31 at St. Edward Catholic Church in St. Edward. Father William L’Heureux will officiate.

Inurnment will follow at Evergreen Cemetery in St. Edward with military honors by Crosier American Legion Post #226 of St. Edward.

Visitation will be one hour prior to the service. Palmer-Santin Funeral Home is serving the family.

He graduated from Anthon High School in Iowa. Following graduation, he worked at St. Vincent’s Hospital in Sioux City, Iowa as a physical therapy assistant.

He enlisted with the United States Marines in 1972. He was a Sergeant in the Marines. He was stationed at many locations including Philippines and Okinawa, Japan.

In November 1975, he married Jolene Mausbach.  To this union, four children were born: Nichole, David, Josh, and Justin.

He enjoyed fishing, camping, and restoring vehicles. He loved spending time with his family. He was a member of the American Legion.

He is preceded in death by his parents; a sister, Judy Reickmann; and grandparents Roy and Lalia Downey.