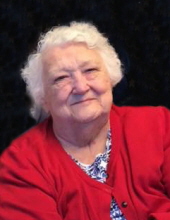 B. Ila McDermott, age 80, of Oto, Iowa, passed away on Saturday, June 1, 2019, at Correction-ville Specialty Care of Correctionville, Iowa.

A Mass of Christian Burial will be held at 10:00 a.m., Saturday, June 8, 2019 at the St. Joseph’s Catholic Church of Anthon, Iowa. Father Richard D. Ball will officiate.

Committal will follow in the St. Mary’s Catholic Cemetery of Oto, Iowa.

Bertha Ila McDermott was born March 12, 1939, in Oto, Iowa, the daughter of Harold O. and Rozella M. (Downing) Lillie. She grew up in Oto and Sioux City and graduated from Oto High School.

On May 16, 1957, she married her high school sweetheart Tom McDermott at St. Mary’s Catholic Church in Oto, Iowa. Five children were born to this union: Tina, Tony, Susie, Joe and Pat.

Ila was a loving and caring mother who cherished the time spent with all her family. She raised her two grandchildren, Peter and Maggie, after her daughter Tina was unable to.  She passed away on July 21, 1998.

Ila was the secretary at the Oto center of the Anthon-Oto Community School District and an aide in the Anthon center when the Oto location closed.

Ila was a member of St. Mary’s Catholic Church in Oto and served as an organist.

She was a member of the Altar Society and the Catholic Daughters until the closing of the church.  She then became a member of St. Joseph’s Catholic Church in Anthon. Ila was also a member of the Henry V. McKenna American Legion Auxiliary in Oto.

She was preceded in death by her parents Harold and Rozella Lillie; her husband, Tom McDermott; her daughter Tina McDermott; brothers Hollis, Gerald and Richard Lillie; her brother-in-law, Roger King; and other extended family.