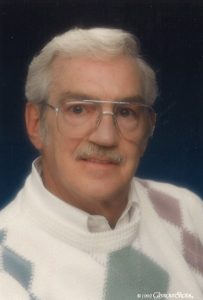 A funeral service was held on Friday, May 31, 2019 at 11:00 AM at the Nicklas D. Jensen Funeral Home of Moville with Clif Cockburn officiating.  Full military rites followed the service.  Burial will be at a later date.

Larry Jones was born on September 2, 1935 in Hinton, Iowa, the son of Floyd and Ella (Richards) Jones.

He was raised in Hinton and attended Hinton schools until 1946, when his family moved to Sioux City.

Larry attended school at Woodrow Wilson Jr. High School until the family moved to Cherokee, and he graduated from Cherokee High School.

Upon graduation, Larry joined the U.S. Army and was stationed in Korea.  While he was there, he enjoyed working with the orphaned children.  He then joined the Air National Guard.

Larry attended business college in Sioux City and was employed with Midwest Electric until starting Jones Bookkeeping and Tax Service.

On August 13, 1977 he met his soulmate, Trish Horton Butters.  They had a whirlwind romance and were married on November 18, 1977 in Moville, Iowa.

Larry enjoyed golfing, reading, dancing, hunting and doing 4th of July fireworks with his grandchildren.  The highlight of their year was always the trip to Cancun, which he and Trish did for 25 years.  They made many friends there and always coordinated their trips to see one another.

He was preceded in death by his parents; his brothers: Lowell, Pat, Gerald, Wayne, John, Dave and Tom; his sister, Theta; his step-son, Troy Butters; his grandson, Chris Jones; his father-in-law, Junior Horton; his beloved dog, Taffy and his grand-dog, Danny.

We miss him so much already.  We know that he’s smiling down on us.