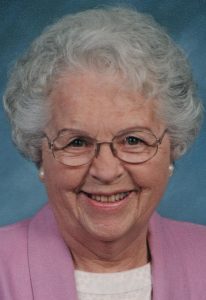 Memorial service was held at 11 a.m. Tuesday, June 4 at Christy-Smith Funeral Home, Morningside Chapel. Burial will be at a later date in Climbing Hill, Iowa.

Vera Ione Spangler, the daughter of Ralph and Ruth (Goodrich) Spangler, was born on August 1, 1923 on a farm near Climbing Hill.

Vera is survived by her children — Cindy (Wayne) Kurle, Adrian (Jackie) Roy and Rob (Deb) Roy — along with numerous grandchildren and great-grandchildren.

She was preceded in death by her parents, her husband, and her daughter, Pam Hefner.