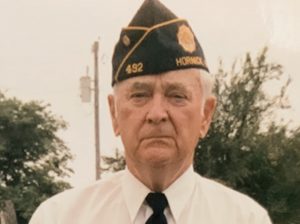 A Funeral Mass will be held at 10:30 a.m., Friday, June 7, 2019, at the St. Joseph’s Catholic Church of Anthon, IA. Rev. Msgr. Kenneth A. Seifried will officiate.  Burial and Military Rites will be held at a later date.

Lyle Edward Groth, the son of Elmer and Inez (Franzen) Groth, was born July 30, 1931, in Cushing, Iowa. He was raised in the Climbing Hill, Iowa, area and received his education at Climbing Hill High School graduating with the class of 1949.

After graduation, Lyle enlisted in the United State Air Force. Upon his honorable discharge in 1954, he returned home and was engaged in farming.

On February 19, 1955, Lyle was united in marriage to JoAnn Finzen at St. Joseph’s Catholic Church in Anthon, Iowa. The couple were blessed with three children: Daniel, Patrick and Michael.

The family made their home on the farm where Lyle was a grain and livestock farmer. He also did custom corn shelling and was a seed corn dealer.

Lyle was an active member of the Hindman-Steele Post #492 of the American Legion-Hornick, Iowa. He was very involved in and proud of starting the Sons of the Legion chapter in Hornick.

Lyle enjoyed fishing, playing a competitive game of cribbage, restoring antique tractors, and spending time outside on his farm.

He was preceded in death by his parents, Elmer and Inez Groth and his stepfather, Bernie Manley.