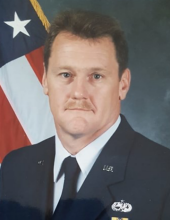 Ernie Charles Devlin, 58, of Colstrip, Montana, passed away on Thursday, April 4, 2019, surrounded by his family in a Billings, Montana hospital.

A Graveside Service will be held at 1:00 p.m., Saturday, June 15, 2019, at the Memorial Park Cemetery of Sioux City, Iowa. Rev. Sheryl K. Ashley will officiate. Military Rites will be conducted by the United States Air Force.

Ernie joined the Marine Corps in December 1979. He married the love of his life, Roxann Backer-Devlin, on June 25, 1982. Together, they welcomed their first daughter, Taima, in June 1984.

Ernie left the Marine Corps in September 1984 and joined the Air Force on February 14, 1985. Ernie and Roxann welcomed twin daughters, Tarah and Torey, in January 1986.

Ernie retired from the Air Force after 23 years of loyal service to his country in June 2003 After retiring, Ernie worked at Well’s Enterprises in Le Mars, Iowa for 5 years. He and Roxann moved to Colstrip, Montana in the summer of 2008 where Ernie worked for PPL Montana as a trainer until the time of his passing.

He enjoyed his work with PPL Vets and was proud to call his fellow Marines and Airmen brother and sister. His military family was as important to him as his biological family. Ernie was thankful for every day that he was given and lived his life to the fullest.

During Ernie’s time in the military he served as a youth coach for many sports. To him, the wins and losses were not important. He was more concerned about helping to enhance the lives of his athletes. Wrestling was his passion and he shared it with many young wrestlers.

Along with coaching, he supported his daughter’s efforts in sports and all their other endeavors.

Ernie was more than a husband, father, brother, uncle and grandfather, he was a friend to many. He never met a stranger, and he treated everyone as if they were a part of his family. Ernie would give the shirt off his back to anyone in need and tried to have a positive attitude at all times.

He always looked for the best and brightest in every situation and would help others see it as well. He was truly a superhero who now has wings under his cape.

Ernie had a special bond and love for his grandchildren. He enjoyed spending as much time with them as he could. His grandchildren thought of him as “the best and greatest Papa ever.”  His love for life and family will continue to live on through his family.

He was preceded in death by his father, Ernest D. Devlin; his mother, Jennie Devlin; brothers Jack Smith, David Cammock and Robert Devlin; two grandsons, Bryton and Brenden; and one nephew.