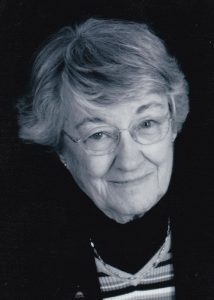 Funeral services were held at 10 a.m. on Friday, June 14, 2019, at Calvary Evangelical Lutheran Church (2900 Avenue of the Cities, Moline).  Burial was at Rock Island National Cemetery.

Memorials may be made to Luther Manor Communities, 3131 Hillcrest Road, Dubuque, IA  52001.

Esther was born on February 7, 1930 in Kingsley, Iowa, the daughter of Arthur and Anne (Rischen) Handley.  She married Robert J. McCain on February 6, 1960 in Emmetsburg, Iowa.

Esther was a woman of integrity and courage.  She quit a teaching position when the superintendent changed a grade for a student athlete.

She had the unique opportunity to travel to Cuba following her high school graduation.  As a young, single woman, she took a summer journey with a girlfriend to Maine, where they worked at a fish cannery to make money for the return trip.

Esther ventured from her family in northwest Iowa to Michigan to accept a teaching position which also led to her earning a Master’s degree from Michigan State University.

Esther continued to work outside the home and raise her daughters while moving around the country as her husband was transferred to several places in Iowa, Kansas, Michigan, Illinois and California.  She enjoyed traveling, camping, crafts, reading, and spending time with her grandchildren.

Esther was a member of Holy Ghost Catholic Church.

She was preceded in death by her parents and husband.