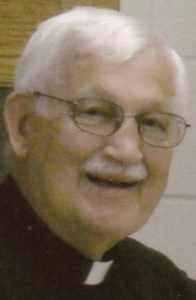 Service was held at 10:30 a.m. Tuesday, June 13 at Resurrection of Our Lord Catholic Church in Pocahon-tas, Iowa. Bishop R. Walker Nickless celebrated Mass with other priests from the Diocese of Sioux City concelebrating. Burial followed at Calvary Cemetery in Pocahontas.

Arrangements are with Rexwinkel Funeral Home in Le Mars, Iowa. Expressions of sympathy can be extended to the family through www.rexwinkelfh.com.

Richard Sebastian Ries was born March 7, 1937 at 4:45 a.m. to S. “Barney” and Amelia (Hronek) Ries in their stucco house in Pocahontas. He was baptized on March 14, 1937 at Sacred Heart Catholic Church in Pocahontas by Father George Wesseling.

Richard graduated from Sacred Heart High School in Pocahontas in 1955. He graduated from Loras College in Dubuque in 1959 and from Mount St. Bernard Seminary in 1963. On June 1, 1963, Rev. Richard S. Ries was ordained a priest for the Diocese of Sioux City, Iowa.

Father Ries retired at the age of 75 and moved to Ruthven for three years and then moved to Sibley, Iowa, where he lived the remainder of his life.

He was preceded in death by his parents; his brother, Father Don Ries; and a nephew, Richard Ries.