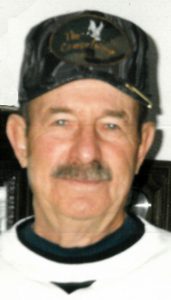 John C. Propeck, 87, of Sioux City, died Tuesday, June 11, 2019. Memorial services were held at 11 a.m. Monday, June 17 at Meyer Brothers Colonial Chapel.  Burial was in Arlington Township at Moville. Online condolences may be made to www.meyerbroschapels.com.

John was born on June 3, 1932, in Sioux City, Iowa, to Carl and Helen (Holly) Propeck.  He attended Hopkins Grade School and West Junior High, and graduated from Central High School in 1950.

John was a life-long baseball fan, playing on numerous teams including some pro and much semi-pro baseball.  Following that, John played fast-pitch softball in numerous tournaments around the area.

John was a huge Chicago Cubs fan, living long enough to finally see them win the World Series.  Saturdays in the fall were devoted to watching or listening to Notre Dame Fighting Irish football.

John worked in the moving and storage industry for much of his early career.

In 1971, John and Mary Ann moved to Minnesota, where they owned and operated Crescent Beach Resort in Osakis for 10 years, Northward Ho Resort in Park Rapids, then to Balsam Beach Resort in Bemidji.  The couple moved to Moville in the year 2000.

John was an admirable fisherman, and he was known by many throughout the area for his skills.   In addition, he was an avid hunter, a great shot, and a superb duck caller.

He is preceded in death by his parents; his wife, Mary Ann; his stepmother, Celestine (Sally) Propeck; his grandmother and step-grandfather (who helped raise him), Mabel and John Eliades; his best friend since high school, Wayne Sutherland; and his real favorite, Harvey, his lab.

In lieu of flowers, memorials may be made to Ducks Unlimited.

The family would like to extend a big thank you to the staff and residents of Northern Hills Independent Living for all of the kindness they showed John, especially Rhonda, the dining and housekeeping staff.