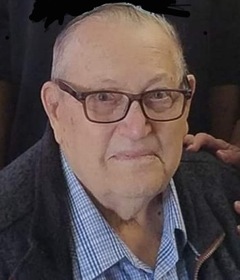 Merle A. Kurtz, age 91, of Cushing, passed away on Saturday, June 15, 2019 at the Good Samaritan Society of Holstein, surrounded by the love of his family.  Merle Kurtz went to his heavenly home Saturday June 15, 2019.

A funeral service was held on Tuesday, June 18, 2019 at 10:30 AM at the First United Methodist Church of Cushing with Rev. Kim A. Crummer officiating.  Burial was at the Cushing Cemetery of Cushing.

Born to Harry and Isabelle (Joslin) Kurtz February 16th, 1928 in Cushing, Iowa, Merle graduated from Cushing High School and spent his life farming.  On September 24, 1950 Merle united in marriage to Mardell Birkley and they lived on the family farm near Cushing, Iowa.

Merle was proud to be a farmer and loved working the family land.  That same land was designated as a Century Farm in 1989, first purchased by Merle’s grandfather Henry, and then his father.  He raised pure bred Hereford cows and Hampshire hogs.

Merle will always be remembered for his stripped bib overalls, seed corn caps, his strong work ethic, and his giving heart.

Merle enjoyed long Sunday drives to check out the crops, and while he didn’t have many hobbies, he did love to fish and he shared that love with the entire family. Nothing was more important to Merle than his family and spending time together, usually around the family table.

Merle believed his greatest gift was his five children.  He also had a soft spot for his grandchildren and great-grandchildren.  His face would light up whenever they would visit.

Merle and Mardell moved from the family farm to Char Mac Assisted Living in Holstein, in August of 2013 and to Good Samaritan Nursing Home in Holstein in May of 2016, where he was at the time of his death.

Merle was preceded in death by his wife of 66 years, Mardell, and his parents, Harry and Isabelle Kurtz

In lieu of flowers, please consider a donation to the Cushing Fire Department.  They were always quick to respond whenever they were needed when Merle and Mardell lived on the farm.