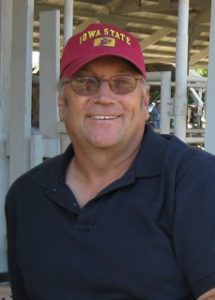 Dennis Rumohr, 63, of Moville, died after a sudden battle with cancer. Farmer, father, and friend, Dennis went to the field in the sky on June 18, 2019.

Visitation was from 5-7 p.m. on Friday, June 21 and the celebration of life service was at 10:30 a.m. on Saturday, June 22, both at Trinity Lutheran Church in Moville.  The Nicklas D. Jensen Funeral Home is in charge of the arrangements.Online condolences can be made at nicklasdjensehfh.com

Spending every day on the farm, enjoying God’s creation, he made his life through his work. Especially enjoying the fruits of his labors in the fall, he lived his life according to the ebb and flow of nature’s seasons.

Always standing up for what was right, he was slow to anger and quick to laugh.

He was happy and proud of his family. They were his greatest joy.  Through his farm and family, he lived his own way and created his own life, making every day his favorite day.

Born on the farm south of Moville to Wayne and Clara Rumohr, Dennis was a 1973 graduate of Woodbury Central High School in Moville.

He studied at WITCC, then worked for Luana Feeder Pigs in Luana, Iowa before managing a dairy farm near Farmersburg, Iowa.

Always loving and faithful, he married Julie Goettler in 1980, moving back to Moville to farm on the family land shortly thereafter.

Pursuing his lifelong dream, he raised his family on the farmland north of Moville where they lived together for thirty years. Each day was a joy, raising pigs and corn.

Farming with his father was a special memory for Dennis. He was happy to continue the circle, working with his son at the end of his life.

Dennis was an active member of Trinity Lutheran Church in Moville. He enjoyed spending time with his family and community during his favorite week of the year — the Woodbury Country Fair.

Family and friends were meaningful to Dennis. He never met a person he couldn’t visit with and befriend. Only a phone call away, he was always there when needed.

Dennis was preceded in death by his parents, Wayne and Clara Rumohr, and a grandson, Trace Kundel.