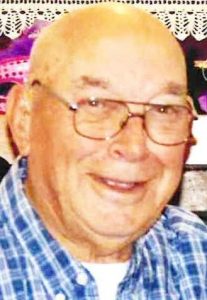 Leonard Harold Cassens, 93, of Anthon, passed away Monday, June 17, 2019, at a Pioneer Valley Living and Rehab in Sergeant Bluff.

Leonard was born on April 25, 1926, to Ben and Anna (Kirkholm) Cassens. He graduated from Bronson (Iowa) High School in 1944. Leonard proudly served in the U.S. Army 78th Lighting Division during World War II and received an honorable discharge in 1946.

Leonard married Juanita Reed on April 11, 1955 in South Sioux City. They made their home near Anthon, where they farmed and raised their son, Rodney.

He enjoyed farming and driving his tractor. He also enjoyed attending the Woodbury County Fair and visiting with all of the fairgoers.

Leonard was preceded in death by his parents; three brothers, Ray, Roland, and Donald; one sister-in-law, Marge Cassens; and a brother-in-law, Joseph Kelley.