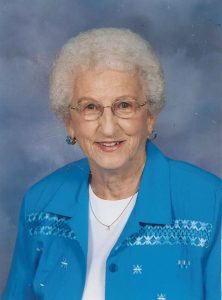 The Johnson – Earnest Funeral Home in Kingsley is assisting Rita’s family with funeral arrangements.  Expressions of sympathy may be directed through www.mauerjohnsonfh.com

Rita Marie Krause was born on August 13, 1920 in Salix, Iowa, the daughter of Paul and Emma (Lagess) Prince.  Rita graduated from St. Joseph’s Catholic High School in Salix and then took a position at Bishops Cafeteria in Sioux City, Iowa.

On March 18, 1941, Rita and Fritz August Krause were united in marriage at Trinity Lutheran Church in rural Hinton, Iowa.

They were blessed with two sons, Ken and Mark.  In 1949, they moved to Kingsley, Iowa and became members at First Lutheran Church.

In 1960, Rita went to work for Anderson Implement in Kingsley.  After 20 years, she retired and devoted more time to volunteering in Kingsley.

Rita taught Sunday School at First Lutheran Church for many years and participated in the Mary Circle.  She enjoyed bowling and she dearly loved her family.

Memorials may be directed to First Lutheran Church in Kingsley, Hospice of Siouxland, or Holy Spirit Retirement Home.