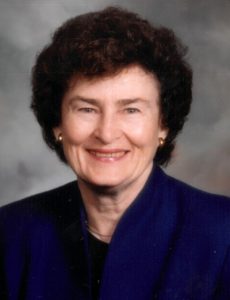 Rosemary Sheehan died on June 18, 2019 at her home in Dakota Dunes, South Dakota.

The funeral service was at Sacred Heart Catholic Church on Wednesday, June 26, 2019 at 10:30 a.m. with her son, Reverend John Sheehan; her brother, Reverend John McGuirk; and Pastor Reverend Terry Roder concelebrating.  Burial was at Calvary Cemetery in Le Mars, Iowa on Thursday, June 27 at 10:00 a.m.  Online condolences may be offered to the family at www.meyerbroschapels.com

Rosemary was born on June 28, 1938 in Sioux City, Iowa to Benedict V. McGuirk and Marguerite (Mannion) McGuirk.  She graduated from Heelan High School.

On September 30, 1961 she married James Sheehan at Blessed Sacrament Church in Sioux City.

They lived in Le Mars, Iowa from 1961 to 1968. She was a member of the Le Mars Library Board, AAUW and other organizations.

For about 25 years the family lived in Pierson, Iowa where James Sheehan was President of the Farmers Savings Bank.  She was a Girl Scout leader and CCD teacher.

In 1977 she graduated from the University of South Dakota School of Law.  She practiced with the firm of Crary Huff in Sioux City and Pierson for about 35 years.

She was a licensed member of the Iowa and South Dakota bar. She was a past president of the Siouxland Estate Planning Council.

Twice she was Chairman of the Iowa Commercial Law and Bankruptcy Committee when the committee shepherded passage of several articles of the Uniform Commercial Code.

She was a past President of the Sioux City Symphony Association and a longtime board member, and she was a member of the original board of directors of the Siouxland Economic Development Corporation.

During her retirement, she volunteered as a Court Appointed Advocate in Juvenile Court, tutored for a GED student through WIT and was a docent at the Sioux City Art Center. She enjoyed traveling worldwide, walking with Jim, reading and researching family history.

Her family was most important to her. She is survived by her husband of 57 years, James Sheehan; her son, Rev. John Sheehan of Monticello, N.Y.; her daughter, Julie Anne Sheehan and grandson Miles Mannion Thorsen of East Quogue, N.Y.; and a son, Robert (Sarah) Sheehan of New York, N.Y.