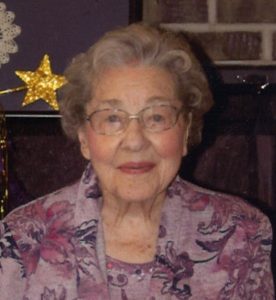 Velma L. Goettsch, age 96, of Holstein, passed away on Friday, June 21, 2019 at the Holstein Senior Living Center of Holstein.

A funeral service will be held on Thursday, June 27, 2019 at 1:30 p.m. at the St. Paul Evangelical Lutheran Church of Holstein with the Pastor Bob Lewis officiating.

A private family burial will take place at the Holstein Cemetery at an earlier time. Flowers can be sent to St. Paul Evangelical Lutheran Church of Holstein.

Velma was born on April 4, 1923 to Rudolph and Louise Bruene Dreeszen in Cushing, Iowa and was raised on the family farm 4 miles north of town (the same family farm being honored this year as a Century Farm).

She attended school at Douglas Center #5 and graduated from Cushing High School.

On April 2, 1947, she was married to Verdean Goettsch at St. John Lutheran Church in Cushing, Iowa.  They raised 4 children in Holstein.

Velma enjoyed having a large garden and cooking and canning for her family.

She was a very active member of St. Paul Evangelical Lutheran Church attending Circle meetings and WELCA events. One of her greatest joys was making hundreds of quilts for Lutheran World Relief.

Verdean passed away in September of 2004, and Velma eventually moved to the Ridge and then Holstein Senior Living (formerly Char Mac) in 2012. There she enjoyed her time with the other residents and visits from family and friends.

If you ever visited her there in the spring and summer, you may have had a hard time finding her, as she spent a lot of time outside weeding!

Memorials can be directed to the St. Paul Evangelical Lutheran Church of Holstein.