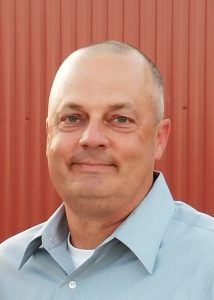 Funeral services were at 10:00 A.M. Monday, July 1, 2019 at First Evangelical Free Church in Sioux City.  Arrangements are under the direction of Meyer Brothers Morningside Chapel.  Online condolences may be directed to meyerbroschapels.com.

Brian was born the son of Mike and Jacquie (Henning) Murphy on August 4, 1970 in Cedar Falls, Iowa. He received his education in Fort Dodge and later attended Iowa Central and the University of Northern Iowa.

Brian married Shanda Williams on September 25, 1999.  They made their home in Bronson. Brian spent his career in the trucking business.  He had worked the last seven years for Consumer Supply Distribution, and he enjoyed all the people he worked with.

Brian was a man of great faith.  He was a member of First Evangelical Free Church where he enjoyed attending Bible study and outcooking the church ladies.

Brian loved anything outdoors and especially spending time with his dog, Clover.  He was a tinkerer, a gear head, and great mechanic.

He created fond memories with his dad attending racing events and with his wife working around the acreage, taking care of their animals and creating their own BBQ Saturdays.

He spent several years on the Bronson Volunteer Fire Department where he looked forward to helping out with the annual fourth of July fireworks show.

He will be remembered for his clever wit and ability to make people laugh.

Brian’s personality was larger than life.  The party started when Brian arrived. He was one of those people that brought the energy level up in every room he entered.

Brian was a dedicated husband, son, brother, uncle, and friend.  His loyalty was unmatched and he would move mountains to help a friend or family member in need.  Brian had a “get it done” attitude, and he knew people everywhere to make it happen.  Brian has people!

He was preceded in death by his mother-in-law, Lela Williams, and a nephew, Efrain Worthington.

In lieu of flowers, donations may be directed to First Evangelical Free Church.