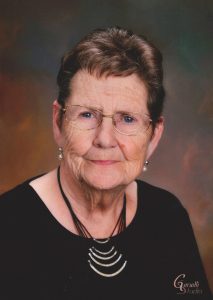 A Graveside Service will be held at 11:00 a.m., Friday, July 5, 2019, in the Oak Hill Cemetery of Anthon, Iowa. Pastor Karen Handke will officiate.

Doris Mae Burow, the daughter of Hiram and Mable (Roach) Livermore, was born on November 20, 1927. She grew up on a farm near Oto, Iowa, where she attended Oto High School.

Doris was united in marriage to George Burow, and to this union four children were born: Micklin, Cecelia, Carl and Nancy. The couple later parted ways.

Doris drove the special education bus for Anthon-Oto, which later became known as Maple Valley-Anthon Oto, for 34 years. She was also a 50+ year member of the Ladies Legion Auxiliary of Anthon, Iowa.

Doris was preceded in death by her parents, Hiram and Mable Livermore; her infant son Micklin Burow and son Carl Burow; and her brother, Homer Livermore.