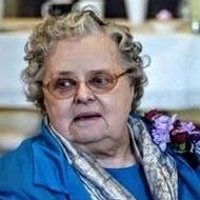 Memorial services were  Monday, July 1 at 10:30 a.m. at Grace Lutheran Church in Correctionville, Iowa. Pastor John Riebhoff officiated. Burial was in the Sunset View Cemetery at Washta, Iowa. There was a family prayer service at 10:15 a.m. at the church on Monday. Online condolences can be left at www.boothbyfuneral.com

Lila was born on August 28, 1928 at Wausau, Nebraska to Lawrence and Blanche (Rohr) Backhaus.

Her family moved to the Washta area and she attended Washta School, graduating from Grand Meadow High School in 1946. She then attended Beauty School.

She was a member of the Grace Lutheran Church in Correctionville where she had served as the church organist and bible school teacher and was active in LWML. She also belonged to the American Legion Auxiliary and the neighborhood club.

She was preceded in death by her parents; her husband Edward on July 29, 2017; a sister, Avis (Backhaus) Polson and her husband Paul; and a daughter-in-law, Pamela Beazley.