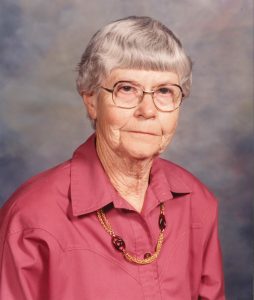 She grew up on the farm outside of Mapleton, and she graduated from Mapleton Consolidated High School with the class of 1942.

Alice went on to further her education and graduated from National Business Training School in Sioux City, Iowa with the class of 1943.

After graduation, Alice worked in offices in Sioux City from the summer of 1943 until May of 1950.

On June 18, 1950, Alice was united in marriage to Marvin J. Sulsberger in Mapleton, Iowa by Rev. Dunn. To this union two sons were born, Todd and Steve.

Alice was a farm wife, and she lived on the farm up until a year ago.

Alice was a faithful member of the United Methodist Church of Hornick, Iowa. She was a member of the Rainbow Girls and a 50-year member of both the Order of the Eastern Star and White Shrine.

Alice enjoyed the companionship of her dog Penny, along with gardening and playing the piano and organ. She treasured her moments spent with her family, especially her grandchildren and great-grandchildren.

Alice was preceded in death by her parents, Roy and Josephine Faverty; her husband, Marvin Sulsberger; her son, Dr. Steve Sulsberger, DVM; a brother, Dale Faverty; and an infant grandson, Jarred James Sulsberger.