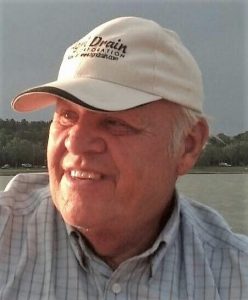 Carl S. Palmquist, Jr. of Lawton, Iowa, passed away at CHI Lakeside Hospital in Omaha, Nebraska on Sunday, June 30, 2019, due to complications from pneumonia.

A memorial service was held at 1 pm Monday, July 8 at Rohde Funeral Home in Kingsley, Iowa. There will be a private burial. Online condolences may be sent to www.rohdefh.com.

He grew up on the family farm in Concord Township near Lawton, Iowa. He attended a one-room country school for the first three years of his formal education until the school closed. He then attended school at Lawton with the class of 1961.

He received his B.A. from Augustana College in Rock Island, Illinois, where he double majored in chemistry and philosophy. He studied a wide range of subjects including physics, math, geology and religion. He completed his teaching education classes at Morningside College and took several agricultural classes at Iowa State University.

After college Carl returned to the family farm. He spent the next 55 years devoted to the study and practice of agriculture, even after he retired from active farming.

He believed that all farmers were caretakers of the earth that had been given to them for a brief time. In service of his land stewardship, Carl served on the Woodbury County Soil Conservation Board for several years.

Carl also taught science and math at Eastwood and Lawton-Bronson Community Schools. He always enjoyed his interactions with young minds and watching his students become strong influential leaders in their communities.

Carl was an avid reader. He took every available opportunity to visit a library or a used book store.

Carl was united in marriage to Gayle Wilcox of the Rock Branch community near Correctionville, Iowa on December 24, 1971. Together they raised their two children and devoted many hours to the education and growth of the youth of the Eastwood, Sioux City and Lawton-Bronson communities.

They enjoyed spending time in the Rocky Mountains and the desert lands of the southwest United States.

They attended many sporting events together — first of their students, then of their children and later of local college basketball and volleyball.

Carl especially enjoyed time with his children and their families. He was also very fond of the celebrations and meals shared with his and Gayle’s extended families.

Carl was preceded in death by his parents; brother-in-law, William Shanks; and nephew, John Michael Lankers.

In lieu of flowers, the family has asked that memorials be directed to either the Dorothy Pecaut Nature Center or the Future Farmers of America Foundation.