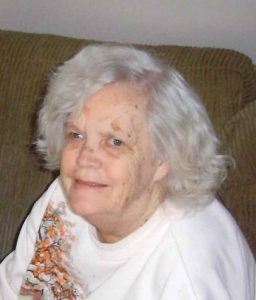 A Funeral Service will be held at 2:00 p.m. Saturday, July 13, 2019, at the St. John’s Lutheran Church of Climbing Hill, Iowa. Rev. David Schoop will officiate, with Committal Services following in the Oak Hill Cemetery of Anthon.

Darlene Faye Sands, the daughter of LeRoy and Erma (Cipperley) Goettsch, was born on October 3, 1930, in Cherokee County, Iowa. She grew up in the Quimby and Washta, Iowa areas and attended country school.

On July 19, 1950, Darlene was united in marriage to John W. Sands in Sioux City, Iowa. The couple were blessed with four children: Carol, Jeffrey, Wayne, and David. The family made their home on the farm in rural Moville, Iowa.

Darlene enjoyed helping on the farm as well as tending to her flowers, garden, and raising chickens.

She was a loving and devoted wife, mother, and grandmother. She relished in time spent with her family.

Darlene will be remembered for knitting slippers that she would give to her family members as gifts. She and John also enjoyed traveling around the country, especially to Louisiana.

Darlene was a faithful member of the St. John’s Lutheran Church in Climbing Hill, Iowa.

She was preceded in death by her parents, LeRoy and Erma Goettsch; her husband, John W. Sands; a son, Jeffrey Sands; her son-in-law, Tom O’Connor; her great-granddaughter, Eden O’Connor; a brother, LeRoy, Jr.; and sisters Helen, Shirley and an infant sister.