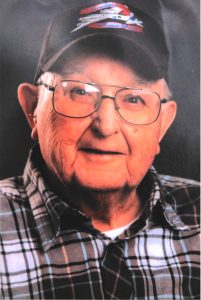 Charles Calvin Knudsen passed away peacefully at the LaSalle Veteran’s Nursing Home on Monday, July 8, 2019 at the age of 93.

Charles was born on the family farm in Kingsley, Iowa to Andrew and Vera (Pierce) Knudsen on December 23, 1925. He was the youngest of eight children, including two sets of twins.

Charles graduated from Kingsley High School at 17 and made plans to join the United States Navy, but he was too young.  It took him two weeks to talk his mother into signing her permission for him to join.

He served as a Yeoman in the Navy in the Pacific Theater during World War II.Discharged from the Navy in late 1945, he met and married Lorna Deviney on January 5, 1947 and lived in Le Mars, Iowa.

Charles worked for several companies as a bookkeeper, but he excelled as a salesman and traveled extensively throughout Iowa, Minnesota and Missouri, eventually moving to Princeton, Illinois in 1963.

He married Margaret Kraft on January 19, 2002 in a ceremony in his hometown of Kingsley, Iowa, where they lived. He enjoyed his time in Kingsley, renewing old friendships as well as being near his siblings and extended family.

For health reasons, Charles returned to Princeton to be with family in 2016, then settled into the LaSalle Veteran’s Nursing Home in December of 2017.

He made many friends among the residents there, was popular with the staff and even was asked by the staff to be a greeter at the entry to welcome visitors.  He loved and welcomed visits from his family and special friends.

He was preceded in death by his first wife, Lorna; his son, Keith Knudsen; his grandson, Brett Sandberg; his second wife, Margaret Kraft; brothers Glen, Howard, Russell, and Vern; and sisters Thelma, Ruth, and Vera.

In lieu of flowers, memorials may be directed to LaSalle Veteran’s Home in LaSalle, Illinois or the donor’s choice.