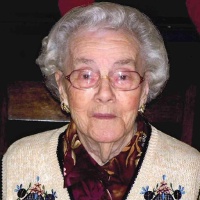 Services were held 11 a.m. Friday, July 12, 2019 at Waterbury Funeral Service of Sioux City. Burial will be at a later date at Fairfield Cemetery in Rock Branch.

Gertrude was born on September 7, 1915 at a farm southeast of Pierson, Iowa, the daughter of Herbert and Nellie (Harvey) Gray. She was the third of four children.

She attended a Country school about one and a half miles east of her home through the first through 8 grades. She graduated from the Pierson High School in 1933.

Gertrude was married to Clarence Franklin Lambert on December 31, 1935. They lived on his parents’ farm and farmed until the early 1970’s when they moved to Sioux City.

Gertrude loved her flower gardens and did a lot of craft work over the years. She was a member of the Whitfield United Methodist Church.

Gertrude is survived by her sons, Victor (Diann) Lambert of Pierson and Robert (Carolyn) Lambert of Hutchinson, Minnesota.

She was preceded in death by her parents; her husband Clarence in 1993; a stillborn daughter, Cleone Lambert; her sister, Opal Stivers; and two brothers, Bob and Oval Gray.