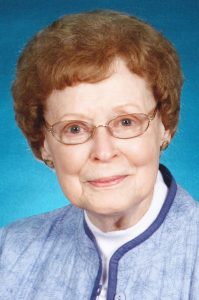 Berna Dene “Bernie” Wenberg, 91, of Sioux City, passed away surrounded by her family on Sunday, July 14, 2019 at a local nursing home.

A memorial service was held Saturday, July 20 at 11:00 a.m. at Meyer Brothers Morningside Chapel.  Burial will be at Memorial Park Cemetery.  Online condolences may be made to www.meyerbroschapels.com.

Bernie was born on August 17, 1927 in Hornick, Iowa to Henry and Kathryn (Sattel) Hanner.  She spent her younger years in the Hornick area, attending school and graduating from Holly Springs High School.

After graduating from high school, Bernie headed for Sioux City, where she attended business school at NBT.

She was united in marriage to Harold Wenberg in 1946 in Omaha.  The couple made their home in Sioux City and were blessed with two sons, Steven and David.

Bernie was a full-time mom and was an in home worker for Weller Fishing Tackle while Harold worked as a full time engineer for the Burlington Northern Railroad.

When the boys got older Bernie took a job at The Sioux City Journal, retiring from the want ad department in 1985.  Harold passed away in June 1998.

She loved tending to her home, sewing, decorating and planting flowers.  Friends and relatives always commented on “Bernie’s Green Thumb.”

She was a member of the Trimble United Methodist Church.  Her faith was most important to her, as was keeping up on family.

She lived independently until 2015, when she decided to move to Sunrise Independent living.  It was a wonderful place for her to enjoy life and make many good friends.  It was also the place where she was first introduced to the wonderful and loving care of Siouxland’s Hospice.  They made her last few days so much more comfortable.

She is preceded in death by her parents; her husband Harold; her son, Steven Wenberg; her sister, Fern (Wayne) Holzman; and her niece Connie Miester.

Memorials may be made to the Hospice of Siouxland.