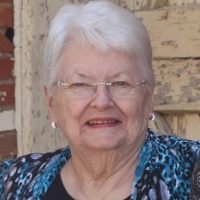 Services were held at 10:30 a.m., Tuesday, July 23, 2019 at First Lutheran Church in Kingsley, with the Rev. Jason Letsche officiating. Burial was in Kingsley Cemetery. Rohde Funeral Home in Kingsley was in charge of arrangements. Online condolences may be sent to rohdefh.com.

Marlyss was born October 17, 1934, the daughter of J. Francis and Nellie (Fitzpatrick) LeMoine.  She grew up in the Kingsley area.

Marlyss and John Bottjen were united in marriage on March 4, 1951.  Following their marriage, they lived and farmed east of Moville, IA, a short time before moving to a farm north of Kingsley where they continued to farm and raise their family.

Marlyss always enjoyed cooking and raising a garden, and she especially loved spending time with her family.  She was a member of First Lutheran Church in Kingsley, IA.

Marlyss was preceded in death by her parents, husband, John, and a grandson, Jonathon Puttman.