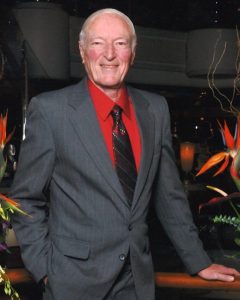 A funeral service was held on Thursday, July 25, 2019 at 3:00 p.m. at the United Methodist Church of Moville with Rev. Harold E. Werley officiating.  Burial was held at the Arlington Cemetery of Moville.

The Nicklas D. Jensen Funeral Home of Moville is in charge of the arrangements.

Larry married his wife Dianne (Pickens) Everhart on June 18, 1961 in South Sioux City, Nebraska. Larry and Dianne lived their entire life together in the same house in Moville, a home that Larry bought with cash for his new wife.

They spent many summer days at their cabin on Lake Okoboji, Iowa — a house that Larry, his brother Neal, their father Miller, their mother Lenore, and a friend built together in 1955.

The Everhart family vacationed in 48 states, Canada, and Mexico. Larry and Dianne enjoyed several cruises and other travel, including visiting Alaska and Hawaii to round out all 50 states.

In his early childhood, Larry lived with his parents on the fourth floor of the stately brick building his father Miller and Uncle Calvin built in 1929 at 233 Main Street in Moville.

Larry went to school in Moville, where he was valedictorian of his high school class. He earned a bachelor’s degree with honors in engineering at the University of South Dakota.

He was a lifelong member of the Moville United Methodist Church, where his mother Lenore was a pillar of the church community and a longtime organist.

Larry and his brother Neal started their own business when they were teenagers by fixing up Wizard bikes and later cars and reselling them. This grew into a Ford dealership called Everhart Motor Company. At the time they initiated their Ford franchise, they were the youngest Ford dealers in the country.

This well-respected business drew a loyal clientele from over a hundred miles away and served the region for 40 years. Larry’s wife, Dianne, was a very successful salesperson and bookkeeper for the business, winning numerous awards.

Car restoration was a passion of Larry’s for his entire life. He restored many classic Mustangs, Thunderbirds, Fairlanes, Torinos, and other vehicles to award-winning condition, including boats, bikes, and even an Indian motorcycle. Some of these were not only best-of-show cars, but also high performance racing vehicles, in which he and Neal won scores of drag races.

Larry’s favorite was his custom modified black and white ’57 Fairlane 500, which set many long-standing racing records and was only beat once in its class by the national record holder. These amazing vehicles are part of the legacy that he now leaves behind in Everhart Motor Museum in Moville.

Larry is survived by his wife of 58 years Dianne; their four children and their spouses: Deborah Everhart and Martin Irvine of Washington, DC; Robert and Cynthia Everhart of Madison, Wisconsin; Mark Everhart of Seattle, Washington; and Michelle and John Walsh of Lincoln, Nebraska; and seven grandchildren: Grace, Katelyn, and Nicholas Everhart and Jacob, Michael, Matthew, and Madeline Walsh.

Larry was preceded in death by his mother Lenore, his father Miller, his Uncle Calvin, and his brother Neal.