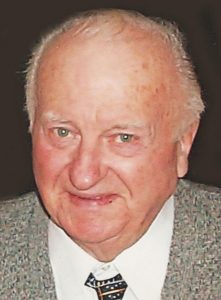 Service were held at 10:30 a.m. on Friday, August 2 at St. Michael Catholic Church in Sioux City, with the Rev. David Hemann as the celebrant. Burial was in Saint Joseph Catholic Cemetery in Salix, Iowa.

George was born in Salix on August 7, 1929 to Clinton and Margaret (Reynolds) Harrington. He graduated from St. Joseph’s Catholic School in 1947 with three classmates.

George was a hard worker on the farm, and he took great pride in everything he did.

He and Mary were united in marriage at St. Michael Catholic Church on June 14, 1949. They raised seven children, starting in Climbing Hill, Iowa and later moving to their farm north of Leeds.

He supplemented the farm income by holding many jobs over the years, but his love was always farming and raising his hogs, cattle, and chickens. George always had a passion for learning and knowledge, which he passed along to his children.

He had many talents, but he was a genius with numbers and finances. He bought and sold numerous farms over the years and loved going to area farm auctions.

He was preceded in death by two brothers, John Harrington and Richard Harrington; one sister, Lenore Truitt; and one grandson, Kirk Petersen.