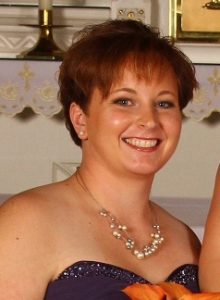 Funeral services were held on Friday, July 19, 2019 at 1:00 p.m. at the Howard Street Christian Church in Colfax.  Burial followed at McKeever Cemetery.

The daughter of Gary and Diane (Prescott) Ahn, Shantel was born on March 28, 1986 in Des Moines. She graduated from Colfax Mingo High School in 2004. She went on to receive her associate degree from Western Iowa Technical Community College.

On November 7, 2009, she was united in marriage to Kiel Ploen in Colfax. She worked as a dental assistant at the Family Dental Center in Storm Lake for 11 years.

She enjoyed crocheting, hiking, biking, reading, cooking and spending time with her dogs, Panther and Boomer. She also enjoyed traveling and had been to Maine, Mackinac, Michigan, Costa Rica and Oregon and many others.

Shantel was a member of the Tuel Shed Training Team.

Those left to honor her memory include her husband, Kiel; father, Gary (Dee) Ahn; grandparents, Wava May and Jimmie Renfro and her siblings, Leah (Jason) Toering and David Case.