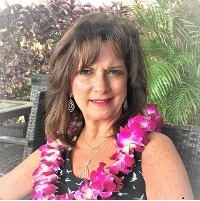 Dawn was laid to rest at the St. Elizabeth Ann Seton Columbarium in Plano, Texas. If desired, contributions may be made in Dawn’s name to the Children’s Medical Center Foundation: 2777 Stemmons Frwy, Ste. 1700, Dallas, Texas or 214-456-8360 or https://give.childrens.com/give-now.

She was a wonderful wife, mother, grandmother, daughter, sister, friend, and most importantly God’s servant. She was the embodiment of Faith, Family and Friends. She always put herself second. She was there for everybody who needed a hand.

Dawn was the fourth child of five. Her siblings are Dan, Debi, David, and Darci. Dawn was always devoted to her parents and helped them in their later years. Dawn loved her family unconditionally.

Dawn moved to Texas in January of 1984 with her young son Ben. She met and married Richard Drouillard on July 12, 1986. Richard and Dawn added to their family when Carly Michelle was born on April 27, 1989.

They were members of St. Elizabeth Ann Seton Catholic Church, where they were very involved with religious education, Love Truck and Meals on Wheels.

Dawn devoted herself to God. She lived a Christian life and demonstrated it daily.

Dawn’s family was always a priority to her and she was always there for them.

Dawn started working in the corporate world with the Staubach Company. She was very successful, and over the years, several career opportunities became available, earning her Series 7 license working at Fidelity Investments.

Dawn eventually worked at Securus Technologies, where she was an invaluable employee as IT Director until her illness. In addition to her full-time work, Dawn earned her EMT certificate in the fall of 2007. She held two positions: Care Flight – Ambulance Driver; Children’s Medical Center ER — EMT.

Dawn truly cared for the children, which was confirmed by the many letters from parents that offered their thanks and praise about how she treated their child. Dawn was an extraordinary individual, who was dedicated to whatever job she was doing.

Dawn loved her pets, her favorite being her pugs. She loved football, baseball, golf, and the summer Olympics.

Dawn and Richard enjoyed traveling together to Hawaii, New York City, the Caymans, Las Vegas, the Texas and California Wine Country and various big cities around the country.

Most of all, Dawn loved her husband, children and grandchildren. She will be missed immensely by all who knew her.

Dawn is also survived by many loving nieces, nephews and friends.

Dawn was preceded in death by her sister-in-law, Janice Murray.