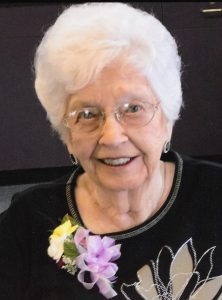 Arlene was born April 13, 1923 in Remsen, Iowa, the daughter of William and Mary (Steffen) Koch.  She was baptized and confirmed at Christ Lutheran Church in Remsen.

She graduated from Remsen High School in 1939.

Arlene married Harold Letsche on August 26, 1941 at Christ Lutheran Church.  They lived on the Letsche family farm southeast of Remsen.

Arlene moved into Remsen in 1968 and worked as a Nurses aid at Floyd Valley Hospital in Le Mars.

Arlene married James Wolf on November 25, 1977 at Christ Lutheran Church and lived on his farm near Le Mars until December 1980, when they moved into Remsen. James passed away January 20, 2009.

Arlene was a lifelong member of Christ Lutheran Church.  She was a Sunday school teacher for 20 years and she sang in the choir. She joined Ladies Aid in 1947 and held several offices.

Arlene belonged to the Jolly Bidders card club, a pinochle club and a coffee club.  Her hobbies were knitting, crocheting and reading.