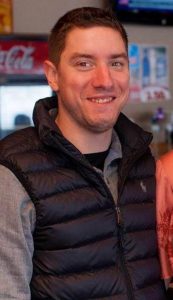 Funeral services were held on Friday, August 23, 2019 at 10:30 a.m. at Grace Lutheran Church in Storm Lake. Burial will be in the Storm Lake Cemetery.

In lieu of flowers, the family requests that memorials be given to the Curtis Walberg’s Family Memorial Fund: Citizens First National Bank, PO Box 1227 Storm Lake, IA 50588. For deposits via PayPal please send to acwahlberg10@gmail.com. The Fratzke & Jensen Funeral Home in Storm Lake is in charge of the arrangements.

Curtis Austin Wahlberg, the son of Chris Wahlberg and Tami (Zellmer) Swanson, was born on April 18, 1995 in Sioux City, Iowa.

Curtis was baptized and was later confirmed as a youth. Growing up, he attended grade school and graduated from high school.

Curtis and Crispina Parra were blessed with one son, Cayden Parra Wahlberg.

Curtis was involved in his community as a Volunteer Fireman for the Storm Lake Fire Department and cherished time spent with his fireman family on and off duty.

He also worked for the City of Storm Lake in various departments.

In his free time, Curtis enjoyed being on the lake, hunting, going to Puffs, watching the Red Sox, cars, motorcycles, and anything to do with the “crew.”

Above all, Curtis loved spending time with his family, especially his son, twin brother, and sister, and his beloved lab, Molly.

Curtis was preceded in death by his infant brother, Nathan Wahlberg, and Molly — Curtis, Cale, and Alicia’s beloved hunting partner and the best dog ever!