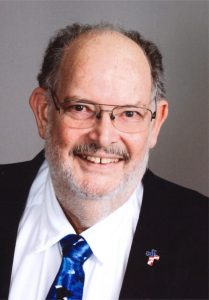 A Celebration of Life was held at 11:00 a.m. Tuesday, August 27, 2019, at the United Methodist Church of Anthon, Iowa. Rev. Jena Finch-Manchester officiated.

Military Rites were conducted by the McNiff Post #389 of the American Legion of Anthon, Iowa. Burial will be held at a later date.

A Masonic Service and Order of the Eastern Star Service was held Monday, August 26, 2019 at 7:00 p.m., at the United Methodist Church of Anthon, Iowa.

His early life was spent traveling as his father was in the military, ending up in Marysville, California.

He married Lorraine Staley and two children were born of that union; Shelly and David Wood.  They later divorced, and he married Barb Day in 1991.

He graduated from Burbank High School in California and attended Morningside College in Sioux City, joining the Air Force from 1969-1973.

He attended the University of Iowa College of Nursing, obtaining a Bachelors of Nursing (BSN) in 1976.

While attending nursing school, Mike worked in Iowa City in the Pediatric Unit until he moved to Sioux City where he worked at Unity Point in the Orthopedic Unit for 35 years.

He was a loving, patient and kind father, husband, brother and friend. Mike was an avid reader and enjoyed camping and watching sports.  He belonged to American Legion Post #64 of Sioux City.  He was a member of the Triangle Lodge #643 A.F. & A.M. where he was Worshipful Master in 2007.

He was preceded in death by his parents, Dale and Evelyn Wood, Sarah and Hank Long; a brother, Tom Wood; and a step-sister, Cynthia Wiebersch.

In lieu of flowers contributions in memory of Mike may be made to his family.  A private burial will be held at a later date.