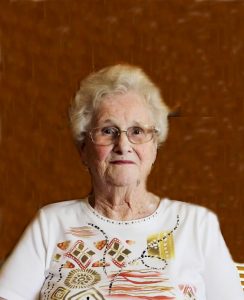 A Celebration of Life service was held at 10:30 a.m. Monday, September 2, 2019 at First Baptist Church in Climbing Hill, Iowa.

Burial was at 10:00 a.m. Tuesday, September 3, 2019 in Westfork Township Cemetery in Climbing Hill.  Online condolences can be made to the family at www.christysmith.com.

Betty Ruth Morgan, the daughter of Robert W. and Nellie (Lanning) Morgan was born August 23, 1925 in Pierson, Iowa.  She graduated from Climbing Hill High School in 1943.

On June 26, 1943, Betty Ruth was united in marriage with Marshall T. Ferdig in Sioux City, Iowa.

She was a homemaker and a devoted mother.

Betty Ruth was an active member of First Baptist Church and the Moville Women’s Club.  She volunteered throughout the community and also during local elections.

Betty Ruth enjoyed watching all kinds of sports, and had a subscription to Sports Illustrated magazine for over 50 years.

Family was very important to her, and she loved supporting her grandchildren and great-grandchildren in all of their activities.

She was preceded in death by her parents; her husband, Marshall; her son, Dennis; a great-grandchild, Benjamin; and two brothers, Robert Lyle Morgan and Eugene Edgar Morgan.

Any donations given to the family will be directed to Heifer International.