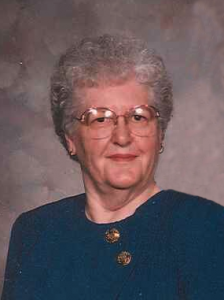 A funeral service was held on Thursday, August 29, 2019 at 10:30 a.m. at the St. John’s Lutheran Church of Cushing with Rev. Tami Groth & Pastor Lynford Dau officiating.  Burial was held at the Cushing Cemetery of Cushing.

The Nicklas D. Jensen Funeral Home is in charge of the arrangements.  Online condolences can be made at nicklasdjensenfh.com.

She lived in various places in the area for 20 years and attended rural school and high school.  She worked for several years as a hired girl.

On October 19, 1944, she was united in marriage to Vernon H. Dau of Holstein at the St. Paul Lutheran Parish.

Deloris was baptized and confirmed at St. Paul Evangelical Lutheran Church of Holstein in 1945.

Deloris and Vernon lived on several farms north of Cushing. She helped her husband with the farming until 1954, when they bought a home in Cushing.  She worked in both cafés and at the telephone office until 1960.

They bought the Andy Henderson farm south of Cushing in Ida County.  She worked for four years at Younkers in Sioux City, Iowa, then helped her husband with the farming again in 1975.

They built a new home in Cushing and moved into it in September 1982.

Deloris was a member of St. John’s Lutheran Church and was a 50+ year member of the American Legion Auxiliary of Cushing.

She was an active member in both of them, as well as belonging to three card clubs in Cushing.

On September 1, 2014 she moved to The Ridge senior apartments in Holstein.  In November 2018 she moved to the Correctionville Specialty Care Facility.

She is also survived by sisters-in-law Myrtle Goettsch of Williamsburg, Mary Hahn and husband Bob of Cherokee, and Geraldine Dau Susie of Cushing, as well as many nieces and nephews.