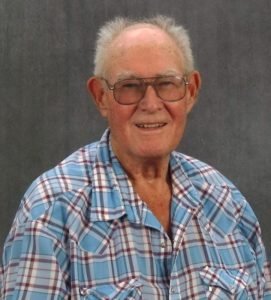 Donald A. Harrison, age 90, of Lawton, passed away on Saturday, August 31, 2019 at Lawton Senior Living Center of Lawton.

A funeral service was held on Wednesday, September 4, 2019 at 10:00 a.m. at the Community Presbyterian Church of Lawton with Chaplain Lorna Peters officiating.  Burial was held at the Arlington Cemetery of Moville.

Donald Allan Harrison was born December 20, 1928 to Everett and Onie Harrison on the Harrison homestead, northeast of Lawton, where he later lived.

Don lived in this area all of his life except for a couple years right after high school when he spent time working on his Uncle Tom Harrison’s farm in Craik, Saskatchewan.

He married Marian Washburn on August 6, 1947 and they farmed in the Lawton, Iowa, area for the rest of their lives.

He honed his skills on Oliver tractor repair while working in his father’s farm implement business in the early 1950s.

He was preceded in death by his wife, Marian; his parents; brothers Morris Harrison and Dale Harrison; and a sister, Carol Green.