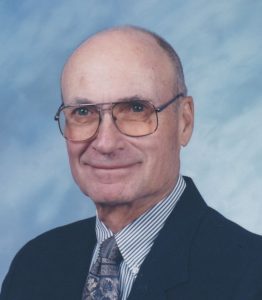 Donald K Groneberg, age 86, died on Sunday, September 1, 2019 at the Mountain View Living Center, a part of the VA Hospital in Sheridan, Wyoming.

Memorial services will be held on Saturday, September 14, 2019 at 10 AM at the First Presbyterian Church of Sheridan.

Kane Funeral Home has been entrusted with local arrangements.  Online condolences may be written at www.kanefuneral.com.

The oldest of three children, Don was born on November 8, 1932 in Graceville, Minnesota to Eric and Wilma (Smith) Groneberg, who preceded him in death.

After graduating from high school in Correctionville, Iowa in 1950, Don joined the Air Force. He spent his duty stateside during the Korean War.

Following the Air Force, he studied accounting at the University of Iowa in Iowa City and became a life-long supporter of his beloved Hawkeyes.

After graduating from the University of Iowa in 1958 with a degree in accounting, Don moved to Chicago.

Don received his MBA from the University of Chicago in 1974.

During his professional career, he worked at Arthur Andersen & Co. and Hollister Incorporated, where he served as the Vice President of Administration and VP of Finance.

Don retired from Hollister in 1980. With Joyce, they spent time traveling full-time in their RV and wintering in Chokoloskee, Florida.

They enjoyed the beauty of the Everglades by boating and fishing before settling down in Sheridan, Wyoming in 1999.

Don enjoyed serving as a board member on a number of foundations and companies — especially his time on the Sheridan College Foundation and as a Director of Micron Industries Corporation, where he served as a director for 33 years.

He and Joyce were active members of the First Presbyterian Church of Sheridan. Don volunteered in many capacities, from serving on the Finance Committee to picking up litter on the road clean-up crew.

Don is survived by his wife, Joyce; their two sons and their daughters-in-law, Bob (Elizabeth) and Tom (Jennifer); five grandchildren: Daniel, Grace, Carter, Avery, and Bennett Groneberg; and a sister, Karen (Mike) Tilma.

Don was preceded in death by his parents and his brother, Larry.

In lieu of flowers, memorials may be made in Don’s name to the First Presbyterian Church of Sheridan (2121 Colonial Dr., Sheridan, WY 82801) or the charity of your choice.