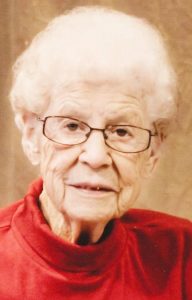 Evelyn “Peg” (Parkhill) Claus, 96, of Smithland, Iowa, passed into the arms of her loving Lord and Savior Jesus Christ on Wednesday, September 4, 2019. She joins her husband of 70 years, Chester “Chet” Claus, in their heavenly home.

Meyer Brothers Morningside Chapel is in charge of arrangements.

Evelyn “Peg” (Parkhill) Claus was born on May 25, 1923 in Oto, Iowa to Charlie Thomas and Edith Melvina Parkhill. She grew up on a farm in the Oto area with five brothers and two sisters.

She graduated from high school in 1941.

Peg married the love of her life, Chet, on July 14, 1945 at Dakota City, Nebraska. They were blessed with 70 years of marriage.

They had two sons, Ben (Jennie) from Elk Point, South Dakota and Greg (Dawn) from Smithland, Iowa. They also had four grandchildren and twelve great-grandchildren.

Peg spent her last year lovingly cared for by the staff at Maple Heights Nursing Home.

In lieu of flowers, please send donations to Hospice of Siouxland.