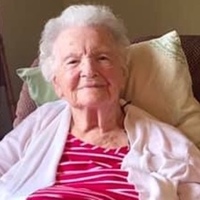 Celebration of life was held at 11 a.m. Tuesday, September 10 at Wesley United Methodist Church, with the Rev. Laurice Streyffeler officiating.

Private burial will be in Memorial Park Cemetery. Online condolences can be expressed at www.meyerbroschapels.com.

Evelyn was born May 29, 1920, to Floyd C. and Ella (Richards) Jones in Hinton, Iowa. She attended school in Hinton, where she earned her high school diploma.

On March 1, 1941, Evelyn married Leland “Lee” Woolworth in Rolla, Mo. They made their home in Sioux City, where she resided for 67 years. To this union, five children were born. Lee passed away in November 1997.

Evelyn worked at Albertson’s during World War II where they manufactured war materials. Over several years, she also worked for Sears-Roebuck Catalog and Omar Bread Company and provided administrative support to their construction business, Woolworth Construction.

She was very active in the Wesley United Methodist Church. She was a part of church leadership, a member of church circle, a pioneer of the SALT (Senior Adults Lunching Together) group, and several other committees.

Outside of the church, Evelyn was a member of the Lioness Club and Red Hat Society. At 80 years of age, she traveled to Alaska to help build homes for Habitat for Humanity.

Evelyn loved to read biographies, play cards and dominoes, send letters and birthday cards, and keep in touch with friends and family as often as she could. She had an admirable strength, determination, and firmly planted faith in her Lord.

She was a planner and a doer, and would do most anything to help out her family, her friends, and her church.

She was particularly honored in recent years to have her last great-grandchild, Evelyn Margaret Woolworth, named after her.

Evelyn was a daughter, a niece, a sister, a wife, a mother, an aunt, a grandmother, a great-grandmother, and a true friend. She will be deeply missed by many and her spirit will live on in each of our hearts and memories for years to come.

Those left to honor her memory are her daughters, Judy Lewis of Dakota Dunes and Jo Ann Patton of Akron, Iowa; nine grandchildren; 19 great-grandchildren; and many nieces and nephews.

In lieu of flowers, donations can be made to Wesley United Methodist Church of Sioux City.