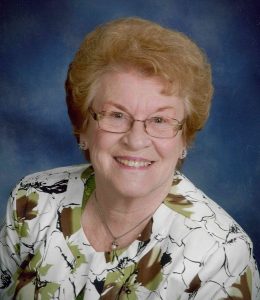 Burial will be at the Greenwood Cemetery in Pierson, Iowa.   Online condolences may be sent to rohdefh.com.

Jackie was born November 19, 1931, in Hartley, Iowa, the daughter of William and Helena (Backstrom) Hartman.  She grew up in the O’Brien County area and graduated from Pierson High School.

Jackie and her music teacher, Dorothy Berens, changed the school song to “Onward Panthers” and was very active in school, where she was a cheerleader and Homecoming Queen.

She loved working at Snyder’s Drug Store in Pierson as a teenager where she met Eugene Herbold.  Jackie married Eugene on December 6, 1949 at the Little Brown Church in Nashua, Iowa.

They lived and farmed in the Pierson area. She was a charter member of Pierson Legion Auxiliary and Pierson Woman’s Club and a lifelong member of Salem Lutheran Church.

She loved to cook and bake, and always willing to lend a helping hand to everyone.  Her beautiful smile, kindness and thoughtfulness will never be forgotten.

Jackie is survived by two daughters, Kathy Hill and Jana Hoppe; two sons and their wives, Greg and Terri Herbold and Bud and Patty Herbold all of Pierson; 15 grandchildren and 24 great-grandchildren; and one great-great grandson; along with many nieces and nephews.

Memorials may be directed to Salem Lutheran Church.