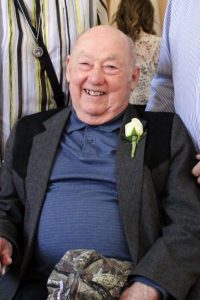 Vernon Lewis “Pete” Leisinger, 90 of Moville, Iowa passed away on Monday, September 2, 2019 at a nursing home in Kingsley surrounded by his family.

Memorial Services were held at 10:30 a.m. Monday, September 9, 2019 at the Moville United Methodist Church. Burial was in Heisler Cemetery in Mapleton, Iowa. Arrangements are under the direction of Waterbury Funeral Service of Sioux City.

Pete was born March 12, 1929 in rural Soldier, Iowa the son of Lewis and Nettie (Riley) Leisinger.

He attended school in Mapleton, Castana and Country Schools, helping his family with the farm after that. He worked for the railroad for a short time, and then went on to work for the county.

Pete joined the United States Marines in 1952 and served during the Korean War. He was honorably discharged in 1954.

Over the years, he worked for the Mapleton Municipal Light Plant, the Corp of Engineers, Big Bend Dam in Chamberlain and the Department of Energy at the substation WAPA in Hinton, Iowa. On April 1, 1989 he retired.

He was a member of the American Legion in Mapleton, Iowa and the Square Dancing Kingsley Swingers. He loved to be around his family and friends. When the kids were younger, Pete would coach Little League baseball, Cub Scouts, and Boy Scouts.

He enjoyed yard work, square dancing, and tinkering around the house fixing things. He was the Senior Companion of the Blue Angels.